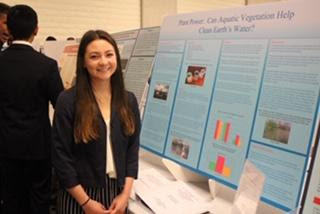 As the backbone of life on our planet, water is one of the most important substances on earth.  Humans, animals, and plants all need it to survive. It makes up over 70 percent of our earth’s surface, and yet, our water is threatened daily by pollution.

Among the biggest threats to clean waterways is oil pollution. According to a 2003 study, the National Research Council of the National Academy of Sciences reported that 343,200,000 gallons of oil were released into the sea worldwide (National Oceanic and Atmospheric Administration, 2015). Of this, 52 percent is attributed to human activity.

Oil in our waterways poses a wide range of environmental problems. For example, the largest oil spill in the US occurred in 1989 when the Exxon Valdez tanker ran aground in Alaska (Figure 1). Within six hours, the ship spilled over 10 million gallons of crude oil, which killed an estimated 900 bald eagles, 250,000 sea birds, 2,800 sea otters and 300 harbor seals. The spill affected more than 1,100 miles of coastline, and oil that resurfaced a decade later was still considered toxic (Rabalais, 2003).

It is not only the ocean that is affected by oil spills, but also bodies of freshwater.  In fact, freshwater oil spills happen more frequently and are often more destructive than spills that happen directly in the ocean (United States Environmental Protection Agency, 2018).  This is because freshwater is often used for drinking water, and it also acts as the nesting ground for freshwater animals such as mammals, aquatic birds, fish and insects. Also, the effects of freshwater spills on invertebrates, microorganisms and algae tend to move up the food chain and affect other species.

In recent years, many activists and environmentalists have brought attention to the problem of oil spills. However, the problem is far from under control. In fact, the accident rate for major tankers almost tripled between 2008 and 2017 (Wan and Chen, 2018). Possibly due to poor maintenance and other cost-cutting measures, the spills during this time period jumped from one accident in every 40 tankers to one accident in every 15. Furthermore, there is no sign that oil exploration and transportation will diminish anytime soon. In the United States alone, there are almost 4 million km of gas pipelines, and more are proposed (Bath, 2017).

Fortunately, nature itself may provide a solution to our troubled oceans and waterways. Globally, scientists are looking at the power of plants to help solve man-made crises. For example, researchers at Oregon State University have shown that kelp can remove carbon dioxide from the ocean, thereby helping to slow ocean acidification (Jones, 2016). Work is also underway at the University of Texas to determine whether deep sea microbes can consume green house gases (Wright, 2018). These real-life examples give us hope that, in the future, science and nature can also work together in finding an eco-friendly solution for cleaning up oil spills.

To test the oil absorbing ability of each plant, I ran three different testing phases, each lasting one week. Each plant was put into its own container with 900 ml of water.  I then added 100ml of the oil mixture to each container (Figure 3). I also added a fourth container with only the oil and water (Figure 4).  This was to confirm that the oil would not evaporate or somehow disappear, and validate that any lowering oil levels was, in fact, connected to the plants.

I would check on the containers daily and note whether any oil had been absorbed, as well as take notes on the appearance of each plant. At the end of each week, I recorded the final results. Since oil and water do not mix, this setup made it possible to accurately see whether the oil was being absorbed or not. This routine was done a total of three different times using fresh plants and materials with each week of experimentation.

Although I was hoping for definitive answers, my results were inconsistent. In each of the three weeks, the Pistiawas able to absorb oil.  However, the Elodea and the Riccia had mixed success (Figure 5).

For the second week, the Elodea actually absorbed 20ml of oil, as did the Pistia.  This time, however, the Ricciacontainer showed no change in oil level. During this week, it was the Riccia plant that appeared the healthiest. The Pistia, again, was the most affected by deterioration.

During the last week, none of the plants absorbed as much oil as in previous testing weeks.  This could be due to the fact that these new individual plants were smaller in size than those tested prior. (According to the aquarist from whom the plants were purchased, it was not prime growing season, so the size and strength of the plants may have been affected.) In any case, the Pistia absorbed 10ml of oil, the Elodea absorbed 5ml of oil, and the Riccia absorbed 5ml of oil. Across the board, the plants looked unhealthy after the week of oil exposure.  They were all a much lighter shade of green and “slimy” looking.

In summary, the plants had mixed success with absorbing oil. Overall, the average weekly absorption rate for Pistia was 16.6 ml of oil. For the Riccia it was 8.3ml and for the Elodea it was also 8.3ml (figure 7). Also, there did appear to be a correlation between plant health and oil absorption ability. Whereas the Pistia was consistently the best at absorbing oil, the plant itself could never survive the oil exposure.  The Elodea and the Riccia, on the other hand, seemed in much better shape post-experimentation.

The results of my experimentation lead me to believe that nature does have some potential to mitigate man-made problems. However, there is certainly no cure or easy clean-up for the damaging effects of oil spills, and the best solution to pollution is to try and avoid it altogether.

During each testing week, the Pistia proved that it could absorb oil. It was the only plant that had measured success across all three weeks of testing.  However, the plants themselves could not survive the testing period and were dead or dying by the end of experimentation. Perhaps scientists could examine the structure of these plants and further investigate what properties of the Pistia made it the most conducive to absorbing oil. If scientists could mimic some sort of synthetic version of Pistia, it might be a useful tool for mopping up future oil spills.

The Riccia and the Elodea both had mixed results with absorbing oil, and I am unsure of how to account for this. During week 2, the Elodea absorbed 20 ml of oil, but during week 1, the Elodea absorbed nothing.  The exact opposite was true for the Riccia.  During week 1, it was the Riccia plant that absorbed 20ml of oil, but in Week 2, the Riccia did not appear to absorb any oil. Was there an anomaly or some other unknown variable that influenced their ability or inability to absorb oil?  Perhaps further testing periods would have provided some insight and answers.

Although I hoped that my findings would be more definitive, I do believe that the idea of harnessing nature to help with man-made problems should be further explored. We live in an age of increasing oil exploration and production, which consequently opens the door to future oil spills and accidents.  One only has to look at the devastating effects of oil spills to realize that humans must step up their efforts to protect our environment. It is not acceptable that so many innocent animals die and ecosystems suffer due to human carelessness and greed.

Ultimately, it should be everyone’s objective to preserve the cleanliness of our world’s water. We all rely on it to survive, and we should all play a role in protecting it. Whether it’s taking additional care to avoid harmful runoff or lobbying for stricter regulations, there is a part that all humans can play.  Part of that role also includes furthering scientific studies to determine what role nature can play in keeping our waterways clean. Perhaps some of the answers are already with us, just waiting to be discovered.

Figure 3. How oil absorption was observed and measured.  In this photo you can see how oil and water levels in the containers do not mix. Plants (from left to right) are: Riccia, Pistia, and Elodea.

Figure 4. Oil and Water Control Container. This picture shows how the water and oil do not mix and was used to verify that oil levels would not change due to factors such as evaporation.  In each week, the oil/water control container showed no change in any measurements. Therefore, any change would be attributed to the plants.

Figure 6. Before and After: These photos of the Pistia were taken one week apart. You can see that the plant has absorbed 20ml of oil. However, it has significantly deteriorated, losing its vibrant color and nearly all of its roots.

You need to be a member of thescienceconnection to add comments!

This reply was deleted.